Premier League is back! Check out when is the next match.

English Football Association has just announced a return of one of the world’s most competitive football leagues. Find out when is the next Premier League fixture.

Best football bonuses on the market

The last time the world saw some Premier League action was back on March 9, when Leicester demoralised Aston Villa four to nill. Back then, nobody could have imagined that the next Premier League matchup would be so far away.

Well, «nothing lasts forever», as it goes, and the English Football Association has finally announced that Premier League season will resume on June 17 to finish the campaign.

Betting Guide - When are the most goals scored in football?

The best football league in the world will also return in quite a flashy way, with Manchester City - Arsenal clash. Nobody could’ve thought of a better comeback than that! Football fans will also be able to find lots of interesting markets regarding the matter at one of the top online bookmakers William Hill. 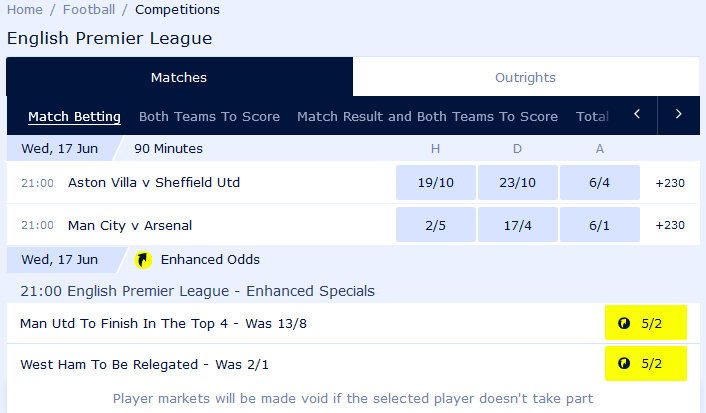 Even more winnings on live football at Netbet

read more
Do you think you know the game good enough? Well, right now you can prove it thanks to the new SnapBet feature! Split the moment and scoop a hefty jackpot when betting live.

read more
Bonuses and promotions play quite a crucial role for lots of punters when choosing the particular top online bookmaker. Does this approach really make sense? Let’s find out together.

Bundesliga is already here!!! Check out what you can bet on!

read more
German officials have announced that their top football division resumes next weekend. Lots of action is waiting for foo

When will football resume in various countries? Updated 01.06.2020.

read more
Footballers, experts, executives and, most importantly, fans are all patiently waiting for their favourite sports to come back. Well, that is why we are here to let you know when various football leagues will resume their campaigns.