When are the most goals scored in football?

When it comes to football, the majority of bets placed on it is concerned with the winner of the match. It is known, that football punters like to back one of the teams and then nervously sit in front of the tv, watching the game and hoping that the team they placed their money on will win. 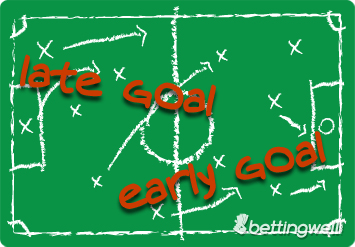 It is very common that the team that we placed our money on loses the game, despite being the favourite. Aren't you tired of the regular match winner bets? Fortunately, the bookmakers are offering more and more interesting wagers on football. Many of them are not connected to the final result of the match, but to separate match events. One of such options is betting on the periods of time where the most goals would be scored. The odds for such bets are usually quite attractive. That is why it is hard to believe that many punters still do not place money on such bets. We hope that after reading this article, you will realise that betting on such things is easy and can be very profitable.

Certainly, all bookmakers' customers stumbled upon bets such as Early Goal, Late Goal or Half with Most Goals. More experienced punters may skip this part, but we would suggest those who just started their betting adventure to read this section carefully. We will shortly describe the most popular goal time bets that are offered by the top online bookmakers.

Enough with the theory, let's check the statistics.

When are the most goals scored?

The numbers clearly show that more goals are scored in second halves of football matches. The analysis of goal time statistics from the most popular football leagues and competitions both at the club and international level indicate that the majority of goals is being scored near the end of the match.

Let's take the example of the 2011/2012 English Premier League season.

The statistics look the same when it comes to major international competitions. The 2016 European Championship in France is a great example. There were 108 goals (an average of 2.12 per game - the lowest since Euro 96) during the 51 matches played at French stadiums. Only 42 of them were scored during the first half, while 62 goals were scored after the break. In the first 15 minutes, we have witnessed merely 13 goals. However, players netted 28 goals after the 76th minute. What is more, if you would like to dig even deeper, there were more goals scored in the last quarter of the match (28), compared to the ones scored during the first 30 minutes (21)!

Is it worth betting on the Late Goal option?

Yes, and no. The statistics presented above clearly shows that more goals are scored in the last moments of the match, than in the first few minutes. It seems quite obvious and logical that most players are tired near the end of the game, which causes them to make more mistakes. The substitutes are mostly offensive-minded players that can make a difference because they are fresh and rested. This gives them a significant advantage over the defenders who are usually slower and more tired. What is more, very often the final result of the match is decided in the last minutes of the match. The team that is losing or drawing goes all-in to score a goal and get a better result, which sometimes ends up very poorly for them.

The bookmakers are well-aware that most goals are scored near the end of the match as they analyse thousands of games daily. Thus, why do they offer the same odds for the Early Goal and the Late Goal options? Statistically, this would give an edge to punters, that would place money on the Late Goal bets. In reality, it is all about the smart bookmakers' trick.

Look at the time brackets of the Early Goal - it is usually much longer than in the case of a Late Goal (difference of few minutes). The players typically have 28 minutes to score an Early Goal, while they have only 15 for the Late one. The bookmakers do this to even the chances between both options. Well, it doesn't mean that we can't outplay them.

There are games with a very high probability of Late Goal. The ones that you are sure there will happen a lot in the last quarter of the match. These are, for example, derby matches or second-legs of the national and European cups - if both teams are on a similar level, it is usually a late goal that could make the difference, especially if one of the teams has to score to advance into the next round. It is similar in the case of play-off stage matches in the major international tournaments such as European Championships or World Cup. If it is only a single match that puts the fate of the team on the line, the players will do everything in their power to score and win, even if that requires fighting till the very last minute.

The importance of the first six games of the season

Hello, Ntambu
unfortunately we cannot provide such information in the comments.
If you have any further questions, please email us directly.
Regards,
Bettingwell Team

please I need 10 teams to score highest goals in second half.i will be glad if replied

Nice one, please I need 10 teams to score highest goals in second half.

Please which country scores more than 2 goals in both halves. I will be grateful for a sincere response.
Thank you

Good morning my people.
Pls which countries that do score most goals in second half?
I need to be enlightened much on this.
God bless u all.

We are sorry Carlson, but we cannot provide you with such information. Please, keep in mind that this article carries only education nature and should not be treated like a cheatsheet but rather like a set of guidelines to help you do better with your betting.

Perfect it all sounds to good to be true, now what are the matches in which more goals will be scored in either first or second half for this week like 15 matches thanks

Hello, we cannot inbox anything as there is no such an option, Phemy. Please, make sure to write us an email if you have some questions.

Well done, please inbox me the 10 teams that scores at least 2goals second half.

I so much appreciate what you are doing. God bless you

Please take a look at the table above

As asked before is it only Bet365 who offer this?

I'am suprised that Norwich managed to score so many goals - they are terrible and always were...

This 'late goal' option sounds promising. How much you have to stake? Is it only possible at Bet365?