Horse racing is also considered the cornerstone of the British betting industry. In 2008 in the UK, far more than 750 million bets were placed off-course on horses with the total turnover of app. £6400 million. The 2010 Grand National, which is the Britain's biggest horse racing event, was witnessed by more than 650 million viewers from all over the world. 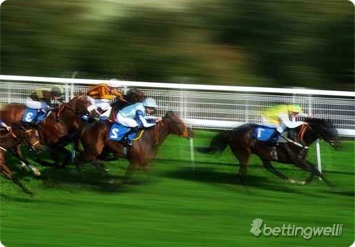 The geographical reach of horse racing is broader than most people imagine. Over 330 race courses currently operate in Australia, more than 150 race tracks in the USA, 30 race tracks in Japan and a number of courses in New Zealand, Ireland, South Africa, or even Hong Kong. The term horse racing itself encompasses not only flat racing or hurdling for Thoroughbreds, but also other forms of racing which include harness for Standardbreds, endurance racing for Arabian horses and quarter racing for American quarter horses.

As it was mentioned earlier, there would not be sports bettign at all if it was not for horse racing. The discipline is considered to be one of the oldest sports in the history, practiced on all continents, in every part of the world. Even though it is not as popular as it used to be, horse racing is still one of the most bet on sports, especially in the UK, where it was first introduced. Biggest British bookmakers such as Paddy Power, Coral, Ladbrokes, William Hill or BetVictor have very good betting offer including events from Europe, United States or Australia. Because horse betting was the first major discipline of sport that was used by the bookmakers to create their bets, the majority of betting terminology and concepts have their roots in this discipline. It is worth mentioning that the bookmakers offer both Tote and fixed-odds betting.

Horse racing seems to be as old as the history of the world itself. The highly spectacular and dangerous Roman chariot races drew hundreds of enthusiastic spectators to stadiums. Top drivers were Roman heroes and enjoyed the status of today's celebrities. The ancient Romans admired horses so much that they carved their giant figures into the chalk hills of southern England.

For centuries, the Arabian peninsula was the stage of a strenuous spectacles whereby the ancient Arabian horses, the purest and oldest horse breed in the world, carried riders who competed in popular long-distance races across the stretches of desert land. In the 17th and 18th century, the crossbreeding of English mares and Arab horses produced the first Thoroughbreds. Today, the breed is almost synonymous with horse racing.

What horse racing means to the British is difficult to describe in words. When it became a professional sport in the 18th century, during Queen Anne's reign, horse racing immediately won the hearts of Britons. It now plays a huge role in British social life and culture.

An exceptional social micro-climate is created at the racecourses by far more than 5 million people who go racing in Britain every year. For the past ten years, about £2M annually is generated for charitable causes through special race days. In terms of demographics rather than numbers, it is horse racing rather than football that deserves to be called the national sport of Britain. It is because of more or less equal proportions of each major social group and a much higher proportion of women than in any other spectator port.

The most popular horse racing bets include: