The most common results in football

What are the most common results in football? How many goals do teams score before the half time comparing to the full time? If you are a true football punter, then you must know how important it is to know answers to these questions. Not only score prediction is a tough-to-master craft, but it is also a great tool that will definitely help you become a better punter. Let us share our knowledge about the art of score prediction in football. 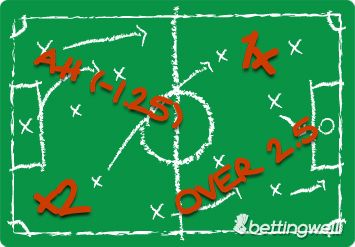 The first thing that comes to one’s mind when choosing a certain football match to bet on is what the final result is going to be. It is very important to have the idea of the final score in football, in particular since the majority of markets are connected with the number of goals or the winning margin. Therefore, it is quite self-explanatory why punters want to know not only the stats of the particular team or competition but also the entire historical data in pursuits to beat bookies. People commonly refer to football as a very exciting and unpredictable sport, full of surprises. Bookmakers perfectly know this and always try to get your feed your desire to place a wager with various football bonuses and promotions. However, statistically speaking it is quite a boring sport to watch. We promise you will be shocked when you find out the most common match scores throughout its entire history.

The most common score in football

Not going to keep you guessing any longer, the answer is, surprisingly, the draw. What is more, while a 1:1 draw is widely considered the most common final score in football history, the 0:0 one appears to be the most popular score at the half time. If you would’ve told this a person who has never watched a single football match, they would most likely say that football is the most boring and meaningless sport. Well, we all know the absolute opposite, this discipline is not only the most popular sport on the entire planet but also the most frequently chosen form of activity.

So, how to successfully analyse football matches?

One of the reasons for that could be the constantly decreasing gap between the best and the worst football teams, as well as the also constantly improving competitiveness of the sport, which makes it more balanced overall. Nowadays, the majority of teams have a similar number of players, financial situation, infrastructure, coaching staff and roster quality.

The most popular score at half time

As for the already-mentioned goalless half-time draw, the main reason for that could be the nervousness of both teams. Both sides are trying their best not to commit a mistake that would cost them a goal or even the entire match. One goal is enough to lose a game, especially nowadays. On the other hand, using the same logic, one goal could also be enough to win one. It then appears to be that the majority of teams are using the following strategy: playing safe in the first half and trying to score during the second one. We should also add that the most goals are scored between the 75th and 90th minute when both sides are trying to secure a win.

Main reasons behind the small number of goals

The «play safe» approach could also be one of the reasons to explain the second most popular score - the 1:0 victory. Unlike the previous example, we definitely have a winning score here, however, it is still not very impressive. Besides the already-mentioned factor of balanced competition, we could also assume that the number of dangerous attacks is smaller in the very top leagues. The highest winning margin, though, could be seen in the following scenarios:

The reason behind that is the skill level and the tactical awareness of players from top-divisions, where players are more likely to stick to the strategy set by the coach. Nowadays, it is more about the points and not the number of goals. Nobody remembers the team that was playing very offensively, scoring lots of goals but ended up in the middle of the league standings. The history only remembers the winners & champions! A great example could be Atletico Madrid.

There were lots of goals scored during the early days of football, however, things got changed over time, thanks to the improvements in strategies, playing styles & skills, resulting in a more even performance. It’s true, we do not see that many goals nowadays, but on the other side of things, the qualify of the game did not get any worse. Even though we see goals less frequently now, they only became much more spectacular, making the game more exciting to watch. What is more, teams used to play four or even more forwards during 1900-1950, which was making the game more offensive-oriented. Contrary to that, we usually see either a lone striker or maybe 2 forwards nowadays, with a bigger defensive focus instead.

Last but not least reason why we have such a small number of goals could be the constant & continuous changes of the game rules. A great example of such a change is offside. Another interesting fact is that the number of goals has also gone down after the implementation of the substitution rule, which still finds its application in livebetting. The reason behind such a phenomenon is not quite clear. However, it might be the case that an exhausted team was more likely to concede a goal without a fresh player on the field than with one.

The comparison of the scores from different leagues

The below data shows both the most common final & half-time scores. The results were taken from the research conducted on the following top 5 European football leagues: La Liga, Bundesliga, Premier League, Ligue 1 and Serie A. 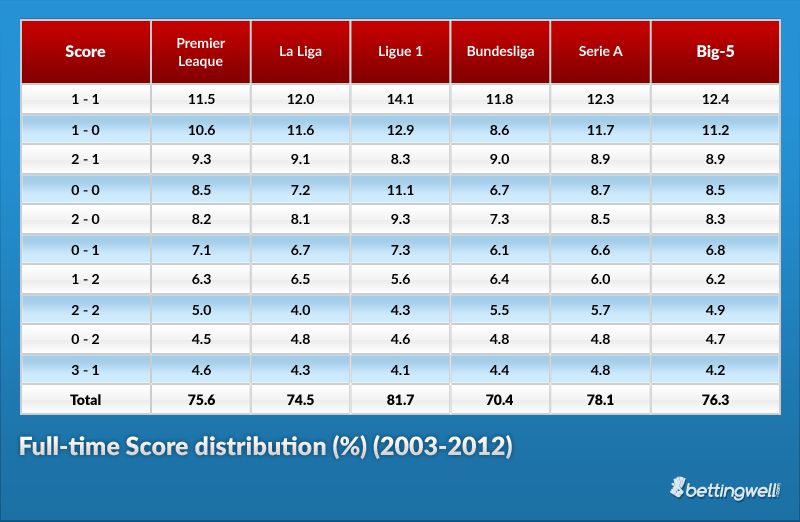 The most common scores in football: 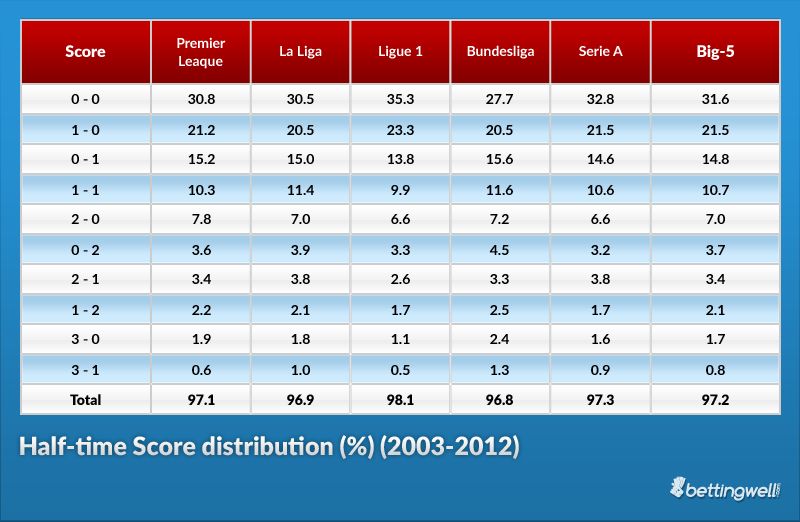 The most common half-time scores in football:

Analysis of the statistics

Looking at the provided data, one could notice that a draw is a very common outcome both at the half time and at the end of a match. The same research of more than several thousand football matches shows that the average odds for a draw offered by the top online bookmakers is 3.24 (56/25), while the average odds of 8.11 (711/100) are offered for a goalless (0:0) draw, along with the average betting odds of 7.25 (25/4) for a 1:1 draw.

The majority of matches that are tied at the half time usually end with either team’s victory, while the matches that got tied in the second half are more likely to end with a draw. Another great observation is the phenomenon of the home-field advantage, meaning that the home teams win more frequently on their own ground. You cannot simply ignore the support of the home team fans & the atmosphere they create inside the venue. The only exception is when the away side takes the lead before the half time, then the chances of them winning the whole match are quite high.

Summing up, it is definitely important to know these statistics when betting, as they can make it easier for you to predict the CORREC SCORE and properly assess the chance of either team scoring next. Please, keep in mind, this betting guide in no way tries to bias you into thinking that other scores cannot happen at all. It only tries to emphasise the fact that such score lines occur more often, in order to help you become more efficient with your betting. Remember, despite what the statics might say, football is quite an unpredictable sport.

I am a professional draw punter with the best strategy

Kenneth Ehirim, try checking out our football section to find the most suitable tutorial but other than that you can simply analyze the number of goals and break it down to whatever you need it.

What the best strategy to be used in predicting halftime draws.

Hello Mulawa,
Please, let us know more about what looks unclear to you.

Has anybody got up to date statistics
I'm always looking for best options to lay on betfair.

I do not think that technology has anything to do with lesser number of goals, and I find it hard to believe it that such results as 1:1 draw are the most common outcomes of a match.

Yes, it is true that you say. Not many goal in match today. Ronaldo score lot and Messi but others not so many.

I see lots of draws in weaker leagues, not in stronger like you say

this stats are weird, dont believe this is true, i bet 1-0 is the most common result, and these odds are not looking reliable....

Great article, seriously. I did not expect draw to be the most common result in football. There is so many good games with a lot of goals, you start to wonder, but i guess its the teams from the bottom and middle of the table that generate that stats...

Wow, this is one of the best articles on football i have ever seen. Good job with the stats, really interesting to see such difference in goals through the times, wonder if it will change in few years without messi and Ronaldo.