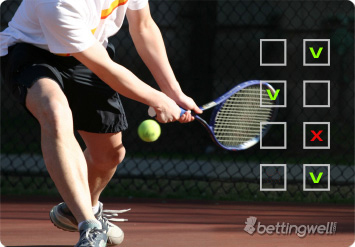 Once confined to the upper classes in Europe, the most celebrated racquet sport is now played all over the world and especially in the United States, England, Australia and France. Today tennis is appreciated both as a popular recreational game played at all levels of society at all ages and as one of the most lucrative professional sports in the world with considerable sponsorship and worldwide televising.

Only few people know that several hundred years ago, a tennis-like activity was conceived by European monks for the purpose of entertainment between religious ceremonies. Crudely enough, the wooden ball was hit between the two players with the hand or with a leather glove, but it didn't stop the religious men from having hell of a time. In the 12th-century France, a court game much more similar to the modern tennis became very popular. However, the racquet came only four centuries later, and it is probably from the French tenez (to take) or tendere (to hold) that the word “tennis” originated.

From the 16th till 18th century British and French nobility and royalty enjoyed an indoor game of "real tennis" whereby Lawn tennis was a later invention as it is dated 1873. It instantly "infected and spread” throughout the British upper class and then all over the world.

Tennis is a truly global game and for this reason it offers a wide variety of betting opportunities throughout the year, from January until late December. There is a number of men’s and women’s tournaments to bet on, ranging from high profile events such as Grand Slams to small-scale local events hosted in most countries with tennis tradition.
Generally, major online bookmakers (and punters) follow and focus on: