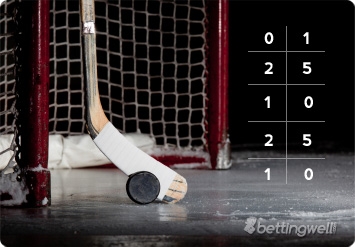 As it was mentioned at the beginning of this article, ice-hockey is one of the most popular winter sports. It had also many fans among sports punters. During the winter season, ice-hockey betting markets are one of the biggest ones. As for bookmakers, Unibet, BetVictor and Intertops have quite good betting offers for this sport. It is worth saying that the US friendly bookmakers have better hockey offer because of the demand for the NHL events and bets from the American punters.

The National Hockey League is one of the four most popular sport leagues in the US and definitely the number one sport league in Canada where hockey players are regarded as cultural icons. What distinguishes the National Hockey League from other super-rich leagues is their unique trophy. Stanley Cup, the ultimate goal of each of the 30 member clubs, is by far the oldest and the most famous trophy in the sporting world. Interesting trivia and rituals are connected with the already legendary Stanley Cup.

The "traveling" trophy, as it is called, is kept for the duration of the whole year by the players and staff of the winning team. Each player on the team gets one day with the cup, and on average the cup spends in travel 250 days per year. Stanley Cup has the names of all of the winning players, coaches, management, and club staff engraved on its chalice which is the reason why it is almost 90 centimetres high!

Following the expansion of the NHL from six to thirty clubs since the 1960's, NHL has become an increasingly multi-national league with almost 30 different player nationalities. Apart from the Canadian and US players, traditionally the core of the league, in the recent years we have witnessed an influx of hockey players from the Czech Republic, Sweden, Russia, Finland, Slovakia, Germany, Ukraine, Kazakhstan and several other countries. Ice hockey is not all about the big NHL. This indoor discipline is very popular throughout Europe, and particularly in its Eastern parts.

While Europe sells out its talented rising players to the NHL, fading NHL stars decide to migrate to Europe, e.g. to Russian Continental Hockey League (KHL) which is growing rapidly in terms of size and stature. Europe's top professional hockey leagues include Germany, Switzerland, Sweden, the Czech Republic, Finland and the already mentioned Russia.

Established at Montréal in 1917, the National Hockey League is the premier professional hockey league in the world. In its current format, the league is divided into two conferences. Each conference is comprised of 3 five-team divisions. The NHL season is divided into 3 parts: exhibition games (starting in August/September), regular season with 82 games for each team (starting in September/October) and Stanley Cup playoffs from April to June.

Let's start with some good news for all those starting their journey into NHL betting. Of the four major sports in the United States, NHL occupies the last position. It means that odds compilers do not devote as much time to analyse American hockey as they do with other disciplines. It means that there are some really good betting deals to be found.

The bad news is that generally NHL high rollers are less privileged, because of the relatively low betting limits (max stake and max winnings). It can be interpreted as a sign from the odds compilers that they feels less comfortable with NHL than with basketball or American football.

Each hockey team develops its own unique style of playing: some teams are more technical, some are more physical. More often than not, whenever brutal play clashes with finesse on the ice rink, the first wins.

Team dynamics is the thing that talks in ice hockey. "One for all, and all for one" is the guarantee of success. Leadership, sacrifice, effort and commitment are the main factors that decide which team will win. In ice hockey one mistake can cost the game, that is why when one defenseman makes a blunder, another comes quickly to his rescue. Offensive players take defensive roles all the time throwing themselves in front of a slapshot. Pay less attention to individual "star" players.

Betting on the NHL and European Hockey is very similar. In Europe, however, there is an additional draw outcome. In effect, when you consider this game: Hannover Scorpions 27/20 (2.35), Draw 33/10 (4.30), Hamburg Freezers 11/10 (2.10), there is no favourite. It means that no matter how much you stake on either of the two teams, your payout will always be more than that. Remember that unlike in any other professional league sports, in the NHL, points are also awarded for losing (the team receives 1 point for losing in overtime or a shootout).

Goalie is definitely the most important player on the ice. Top-class goalkeeper in good form can do wonders in the game and have a big influence on the scoreline. Confident goalie can also have an overall positive effect on the whole team adding to their sense of self-confidence and thus improving their performance. Conclusion: study goalkeepers' form and statistics carefully before betting. First class goalie and elite defence makes a team a Stanley Cup contender.

The teams involved in the NHL are also constantly on the move from one place to another. And since ice hockey is physically a very demanding game, it is most important that players are fresh and rested. If a team has an away game somewhere far abroad, travel-related fatigue can occur and impair their performance. Therefore, some teams are struggling in away games, while boasting an excellent home record. One-game trips for a team like the New York Rangers is often just a bus ride over to Long Island, but traveling for the North-West and Pacific divisions teams can be quite a burden.