Futsal players are constantly placed in decision-making positions, they need to think quickly and be very creative at the same time. The sport is more about skillfulness than endurance and phisical capabilities. Technical skills, quick ball movement and frequency of goals make futsal one of the most entertaining sports to watch. 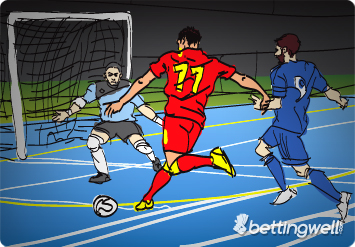 Futsal can be described as a fast-paced, action-packed, indoor alternative of football. In this discipline of sport, two teams of 5, with 4 field players and a goalkeeper compete in an indoor arena trying to score a goal with a ball (smaller than the one in football) in a 40-minutes match divided into two halves.

This variant of football was invented in Uruguay in 1930 by a teacher named Juan Carlos Ceriani who mixed principles of football, basketball (number of players and duration of the match) and handball (field and net sizes, goalkeeper rules). It quickly spread across all of South America. The first international competition took place in 1964, when Paraguay won the first South American Cup.

Today, futsal is popular all over the world, especially in South America. There are many competitions such as Futsal World Cup or Grand Prix de Futsal. Here, it must be said that futsal is governed by two independent organisations, the AMF (concerned only with futsal) and FIFA (governing all variations of football). The national team of Brazil dominates futsal competitions for the majority of its history. What is more, the majority of Brazil's best footballers, including Pele, Zico, Socrates, Bebeto or Ronaldinho, played futsal before converting to its more popular variant.

Bookmakers are interested only in the most prestigious and popular futsal competitions, such as:

Although futsal is not as popular as football, many bookmakers offer bets for this sport. Apart from major tournaments, most bets are placed on the Spanish futsal league. Bookmakers such as Coral and Ladbrokes offer a variety of bets, including total goals and handicaps.

I love the game