Boxing and betting has came hand in hand for decades. It seems that the heyday of boxing betting was when wagering on sports was illegal. Well, things taste best when they're forbidden. Despite the fact that boxing itself is quite a simple sport, boxing betting can be quite complex. Each weight division has different belts to win via the different boxing federations. 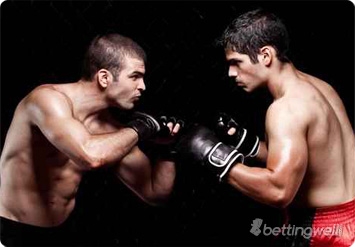 Boxing is one of the oldest and simplest sports. It has been practiced in different forms for millennia. First, it was nothing more than a brutal combat. Then, boxing as a sport and in a sense an art appeared in Greece. According to Greek mythology, it was introduced by mighty Apollo who himself defeated and killed Phorbas, a boxer who urged travellers through Delphi to compete with him. First rules were also established. For instance, in case that the bout lasted for a very long time, the opponents had the option of “klimax” which meant that each boxer stood still and received a blow from his opponent without making any attempt to avoid it. Later, the Ancient Romans brought the sport to the new level of barbarism with the invention of caestus. It was a boxing glove with lumps of metal and or spikes sewn into the leather.

It basically transformed the sport into an inhuman and deadly contest. Throughout the centuries, boxing has gradually assumed a more civilised form, if one can use such an expression about a sport which is all about hitting and punching...and a small dose of tactics. Boxing became especially popular in England in the late 17th and early 18th centuries. What was distinctive about those bouts was that boxers performed without gloves and wrestling was permitted so that there was lots ground fighting with blood and teeth flying. Professional boxing first appeared in the early 20th century when boxing first became a regulated and sanctioned sport.

Another golden decade for the sport came in the 1970s when betting on boxing was even more popular than wagering on NFL. It was the decade of boxing super stars with the heavyweights being ruled by Muhammad Ali, of great rivalries and at the same time of fight fixing and corrupt judges. At the start of the following decade, Mike Tyson stepped into pro boxing limelight. Then, in the early 1990s, the “Iron Mike” fell terribly out of his prime. Then, the heavyweight scene was dominated by two Ukrainians, the Klitschko brothers, Vitali and Vladimir. Nowadays, it seems that there are a lot of contenders for the title of the best, but there will probably never be a boxer like Ali.

International Boxing Federation (IBF) includes seventeen weight classes, from the mini flyweight where boxers may weigh no more than 48 kg (105 pounds) to the heavyweight where the minimum permitted weight for the boxer is 91 kg (200 pounds). World Boxing Association (WBA), World Boxing Council (WBC), World Boxing Organisation (WBO) similarly include seventeen weight classes. Most experts hold the view that WBC is much more prestigious and more respected professional boxing federation than the remaining three. Of all the weight classes, most media attention and at the same time most betting coverage is provided to the heavyweight division. Though, some experts insist that lighter categories offer more entertainment and excitement.

Is it possible to bet per round, so one boxer wins the 1st round, but loses the game, if you bet on the 1st round get money right?

I gonna use this tips on betting for the upcoming fight of marquez vs bradley this October 12 on Las Vegas, I know this will be a helpful tips for me.

What would most people do minus the wednorful thoughts you share on this blog? Who has the endurance to deal with vital topics for the sake of common subscribers like me? I and my pals are very happy to have your website among the ones we typically visit. It is hoped you know how a great deal we enjoy your working hard! Best wishes coming from us all.