The Martingale is a negative progression betting system that is considered to be one of the oldest and most popular betting strategies. The Martingale system is supposedly named after Henry Martingale, English gambler and owner of an casino who encouraged his clients to double-up their stakes after each loss. Nevertheless, there are reports that the system itself might be actually much older and have its roots in 18th century France. The system is mostly used in casino games, but it also can be applied in sports betting. Martingale is known as one of the easiest betting systems. 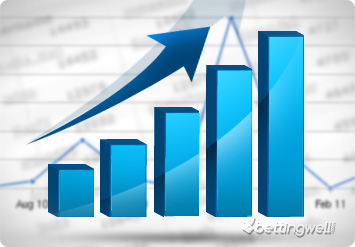 What is the Martingale System?

As it was mentioned above, the Martingale system requires you to increase your stake after each lost bet. Each time you lose, you double the amount of money you have placed on the previous bet and use it in your next bet. This way, one won bet could cover the losses from previous bets and even result in profits. Note that if you win a bet, you place another one with the same stake. It is worth saying that this system works best with even odds bets. It is also worth mentioning that the Martingale system has many forms such as: Mini-Martingale, Grand Martingale or Anti-Martingale also known as Reverse Martingale system.

The result of the game:
In the second example we invested $10240 in total. We predict that 9 of 10 tickets will be lost and we will guess the outcome in the last bet ticket and win $12800. In this case we lose another $7660. Betting on low odds does not pay off.

Things to remember while using the Martingale system

Although this is the most popular betting system in the world, we do not recommend it to the players on a limited budget because the bet amount is growing very rapidly (as in every progression). Nevertheless, it is worth trying the Martingale system out for a shorter period of time as you can learn how to stake and manage your bankroll properly because of this system. Furthermore, if someone has a very large budget, he can gain significant profits using this system. Overall, it seems that the Martingale is the easiest to master and most effective bettign system that can be very useful and therefore is quite popular amongst punters all over the world.

0. Thus, for all games where a gambler is more likely to lose than to win any given bet, that gambler is expected to lose money, on average, each round. Increasing the size of wager for each round per the martingale system only serves to increase the average loss.