Sports betting is much older than you think. Starting from the Ancient Romans, right through the British Empire. Betting on sports has a long tradition in the human history and civilization. Learn more about the history of sports betting and bookmaking in this article. 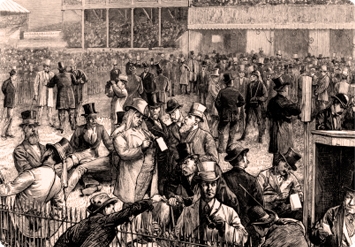 Great Britain – it all started here

Bookmakers’ stakes are undoubtedly the favorite kind of entertainment, gambling roots of which are at the beginning of mankind history. Sources of staking can be seen as far back as the times of Roman Empire where conclusion of a bet for the best gladiator was daily routine. Let’s leave the times of Ancient Rome and get to moderns times.

Here we can concentrate our attention on British Islands which are known as “homeland of bookmakers’ craft”. First recalls about conclusion of bets for money reach as far back as the XVIII century London where in the auction house of Richard Tattersall stakes for horse races began to be taken. The term bookmakers’ craft in this context meant keeping a record book of all accepted stakes. The notion “bookmaker” from the very beginning in England wasn’t associated in the best way. Only after actions of two representatives of this occupation – Fred Svindela and Leviathan Davis lead to the fact that lists of bookmaker bureaus began to be published in London. Thanks to this the so organized trading activity let to placing stakes out of people’s dwelling places. The real staking began somewhat later also on the islands. Namely there so far back as the beginning of the XX century the notion “bookmaker” appeared and the first legal official stake receiving points for sports were created. The person who introduced fashion for bookmaker bureaus was John Moore who opened the first bureau in 1922 in Liverpool – “Littlewood Pools of Liverpool”.

The notion itself was created out of two words – “book” (stake) and “maker” (make) and from here a “bookmaker” is a person who “stakes”. In connection with this a question appears: where did the idea of accepting stakes come from? The answer to this question is very simple and consists of two parts. The end of XIX and the beginning of the XX centuries is considered as the development of the most popular sporting discipline – football. In 1888 first in the world professional match began in England.

Interest in this kind of sport grew rapidly also thanks to the Mass-media especially the regional journalistic publications which presenting reviews of matches of the English league began to make their predictions for the following matches and even possible coefficients for games. The other reason was money of course. The main aim of placing a stake is receiving of income from it. One party placing a bet always bears a risk of defeat irrespectively of the game outcome. In this situation we can claim that the popular in Ancient times slogan “bread and circuses” in XX century receives a new not yet fully known meaning. Sport brings many emotions and entertainment to spectators but also attracts fans of gambling with bookmaker bureaus for possible winnings. Before we get to emigration of the “bookmakers’ craft” beyond Britain we should think what it is about.

For many years mutual bookmakers’ stakes were known as a form of “pure gambling”. Looking into this kind of entertainment objectively we can claim that it is absolutely different in reality. Gambling is a word of Arabic origin which was created with the aim of card games identification. In the English language this word means risk. In conclusion we can claim that gambling is a risky phenomenon the result of which depends only on chance. What then does it have in common with bookmaker craft? When somebody comes to a casino and bets at any number which is on the roulette it is pure gambling. Nobody can predict what number can turn out exactly but you can guess. Bookmakers’ stakes is something completely different. Everybody knows that luck can turn to everybody in all spheres of life but as opposed to roulette, placement of stakes is based on knowledge, skills of analytical analysis and player discipline. If somebody is a stockbroker is he then called a gambler? Of course not. That is why results of sports matches should be estimated in the same way. It should be remembered that many players spend much time placing stakes, making them an additional source of income.

Development of betting in the world

An ideal beginning of stakes for sports foreboded a perfect career of a bookmaker and what comes afterwards – a lot of money. In several years’ time there was a good conjuncture for bookmaker bureaus. Very quickly they began to extend the sphere of their influence, new stake receiving points were created and more people became interested in professional placement of stakes. More independent bookmakers appeared on the market. Every entrepreneur who wanted to begin a bookmaker career could read corresponding literature and open his or her own business. An intensive press review and talent to logical thinking lead to the fact that everybody with desire could become a good bookmaker.

It should also be mentioned that opening of a stake receiving point wasn’t a hard task to do. Growing popularity of bureaus couldn’t pass without an echo. The noise coming from scandalous countries spread virtually to all corners of the world. Unfortunately development of stake receiving points led to slump of bookmaker bureaus income. The market was overfilled with bureaus, new clients didn’t show up and there were more and more bookmakers. This led to a slow collapse of the weakest bookmaker bureaus. Sporting stakes and the whole market connected with them ceased to be an acceptable and attractive method of earning easy money. Bookmakers with little work experience stopped their activities on their own the reason of what were the false taken decisions. Intense competition among bookmaker bureaus led to the fact that analyzing of sporting events became even a harder task for players. Bookmaker bureaus lost their clients who moved to bigger companies which could afford themselves better advertising and offer bigger winnings. This led to the first crisis in bookmaker’s industry. Certainly an important step forward and also exit from crisis was the distribution of bookmaker activity in the internet. This idea came to mind to Americans who wanted to earn on bookmakers’ stakes in 1950th.

Development of telecommunications and informatics became a reason to have unlimited possibilities of placing stakes for the players. The main problem was little quantity of players who had computers. The first official stake made in the net dates back to 1972, Canada. The reason for this was formal-law-technical difficulties which were the result of illegality of gambling in the USA in the form of offline political resistance and also underdeveloped network Internet. Stakes in the internet gave players possibilities to create bookmaker coupons at any time of day from any place in the world. The only condition was to own a computer and have access to Internet or a cell phone with web-browser. These conditions were fulfilled in a global scale only in the middle of 1990th. In those times a real boom of bookmaker bureaus was taking place. As for today several dozens of online bookmakers operate on the market including those more or less respected. It should be noticed that in the second half of the 1990th the time was a “golden period” for offline bookmaker bureaus. New companies and their affiliates began to grow like mushrooms after the rain over the whole Europe.

Bookmakers developed technologically more and more from year to year simultaneously improving the quality of offers and client servicing as to attract even more of them. As it seemed the business was developing well since record-breaking profits had been registered on the market. Popularity of sports grew and the interest to bookmaker stakes grew with it. The famous slogan of the American multimillionaire Robert Toru Kiosaki – “if nothing is invested – nothing is earned” in the case of bookmaker bureaus became true.With the aim of diversification of income online bookmakers accepted the following genius decision which turned out to be the right one. Of course we mean the purchase of casino licenses in which diverse internet games beginning with monopoly, poker, roulette, slots and others can be found. Such an act attracted even more people especially those who aren’t interested in sports but only in gambling which besides isn’t taxed.