Whenever money comes into play, there is a temptation for a scam. Especially when the money is big. In bookmaking the money involved is so big, that everyone wants to get some for themselves, be it a club owner, a referee or even sportsmen themselves. Despite what some of you may believe, no sport is safe from pre-determined matches, and sometimes it is hard to unveil if a scam has been made. We want to mention some of the biggest scams in bookmaking, and show you how to spot them in advance. 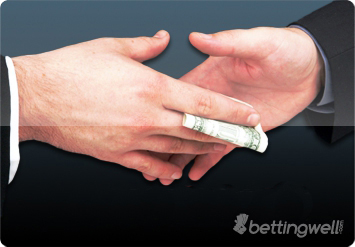 This phenomenon has got it's name in sports betting slang – a Fix. Fix means that there is an event which outcome or scenario has already been settled so that third parties could achieve financial benefit. The sports betting guide includes one concept which is more or less connected with our topic. We mean the so-called insider - very important information for teams which can increase the interest in this match if it is reliable (a leak of information from the players themselves or people connected with the team). We have seen many times that the corruption is present in sports, but many young players who are just beginning to learn to bet at the betting shops still have little knowledge in this topic. We decided to show a few interesting examples of corruption in football and not only in football, which should be taken very seriously. Find out the dark side of betting with us.

Both Scandinavian teams showed millions of TV viewers that even football of the highest European level can get involved in match-fixing. The situation in the group C before the last series of matches was as follows. Denmark and Sweden occupied the first places, and Italy, which played the last game with Bulgaria, for which the situation was obvious, occupied the third place.

Before the match it was clear that the result 2-2 would bring advantage to both Scandinavian teams, and the Italians would be left "overboard", regardless of the outcome of the match with Bulgaria. But the game ended with the score 2-2, and the odds for a draw before the game were equal to 9/10 (1.90), which means that internet bookmakers were in favour of this result.

The judges also want to make money or Robert Hauser in action...

In 2004, a young referee from Berlin Robert Hauser served German Cup Round 1 matches between Pateborn - the team of regional league and HSV Hamburg – the representative of Bundesliga. At first the visiting team was winning with the score of 2 to 0. During the second half Hauser made strange decision: at first he suspended Mpenza, and then, out of the blue, he awarded penalty for the hosts.

Even the local fans were shocked. Ultimately Pateborn won 4 to 2 and moved to the next round, which led to the outbreak of the football match-fixing scam in Germany. As a result, the German police investigation found out that Hauser collaborated with the Croatian mafia, which was involved in match-fixing in Germany, Turkey and Italy. The referee got a 2.5 year term.

“Magic Match" in Brazil, or how to win a state championship.
The last round of the second Division - 16.10.2009 - Maranhão State Championship, Viana and Motorcycle Club played at the first Division. Motorcycle won the final match with the score of 5 to 1. Viana players had the same number of points, but the number of goals was fewer and they had to score 11 goals to win the championship, 10 minutes before the end of the match that seemed to be impossible. Everything is possible in football (especially at this level), and Motorcycle, which began to celebrate too early, realised this. Viana’s tally at the 80th minute was 2 against Chapadinha’s 0, but it scored nine goals against the rival during the last 9 minutes, winning the championship! It is a pity that some of them do not bargain/haggle...

Calciopoli scam in the Italian Serie A.
It is probably the biggest scandal in the history of Italian football, in which four clubs were involved: Juventus, Milan, Lazio, Fiorentina. The person responsible for the scandal was the sports director of Vecchia Signora (the Old Lady) Luciano Moggi. In 2006, during the investigation of a doping case, prosecutor's office came across the recorded conversations of Juventus director and the judges about the selection of referees for the upcoming matches. The leaders of Milan, Lazio and Fiorentina, which as it turned out later had nothing to do with the scandal, were also involved. All clubs were strictly punished, Juventus was sent to Serie B.

The match which made history of men's tennis

(Nikolay Davydenko vs. Martin Vassallo Arguello)
One could never think about fixed matches in tennis - a game for gentlemen who never behave like that. Far from it, Russian and Argentine tennis players can get F grade in conspiracy. Davydenko confidently won 6-2 in the first series of Sopot tennis tournament, and in the second series, although he won first sets with the score of 3 to 0, he eventually lost out to the Argentine rival. Things happen, a temporary crisis of a tennis player, but what about a bookmaker? After Davydenko’s victory in the first match and the first set with the score of 3 to 0 the odds for Martin Vassallo Arguello at the Betfair betting exchange were equal to only 1.20 (they had to be at least 10). Professional players quickly realised that 7.3 million Euro were bet on this match, and someone had bet a lot of money on the Argentine’s victory. You must have guessed how the match ended. Davydenko lost. To make it even funnier, Orange Prokom Open, the main prize, amounted 425 000 Euro. I wonder how much the interested parties earned.

(Olympia Ljubljana and Villach: hockey is not the only link between them).
These clubs must love each other and this is probably not just the seasonal friendship. Not so long ago you could notice the regularity, which brought professional players a regular income, in matches of the Austrian league OEL. Olympia and Villach have been playing with each other in the same league for the last 4 years.
They are not group leaders, both teams play mainly to stay in the league. Both Austrians and Slovenians know that they should help each other. Regularity in this case is that having played 6 games during one season, each team won 3 times. Usually, to satisfy their fans, the host team wins the next matches. The last match of these teams ended with the score of 4 to 1 in favour of Olympia Ljubljana (the host team). I wonder whether their relationship will remain strong in the next season.

Men’s Euroleague or how Russians do business

A few years ago a very interesting event, which at first glance had nothing to do with corruption, happened in men's Euroleague. Why do we write about it? In order to draw your attention to the fact that the Russians will do everything possible to make big money. Spanish club Caja Laboral (host team) and the Russian club CSKA (visiting team) played against each other in the last qualifying round. Match odds were very high especially for the hosts, who were closer to the Top 16, and the victory would bring them the 2nd place in the group. CSKA Moscow was indifferent to this match. The odds at the beginning were approximately equal to 7/10 (1.70) - Caja Laboral; 11/10 (2.10) - CSKA Moscow.

Most punters used such a "present" and betted on a victory of the host team, especially after reports about a weakened visiting team. Odds for the Spanish team fell to the level of 3/10 (1.30) and they became a favourite of this match. Everything would be OK but for the fact that the visiting team consisted of its best players, and huge amounts of money were bet on CSK (odds amounted to about 4.00) at the Asian markets. There was no agreement, but it can be a lesson for the beginners: one can never underestimate the rival, especially Russia, because it can surprise you in the most unexpected situations. Of course CSKA won this match, and they deserve to be respected!

Knowledge is not everything...

As you can see from the examples bookmaker bets have their own laws, which are not always fair. Of course you do not need to exaggerate and say that each match is fixed, but when placing bets we should take into account the fact that we can run into the match, which outcome has already been fixed. Money rules the sports, and real values ​​mean less and less.

Therefore it is sometimes necessary to pay attention not only to the team’s condition, but also to the statistics and the odds. The first signals of odds decrease usually comes from Asian markets. Why? The answer is simple. The limits in Asia are higher than in Europe; if there is a customer who wants to put a million dollars on the match they will gladly accept it. Then the odds for the match go down and European bookmakers react to this a bit later.

If a bookie does not pay attention to it, he/she may eventually suffer great losses. And as you know large amounts of money are not betted without a reason. You should also pay attention to the statistics - the example of the hockey teams, which used 3 by 3 system, which is also often used in football. The aim of this method is best expressed with the help of the proverb: “you scratch my back and I'll scratch yours “. The hosts usually win these types of matches to satisfy their fans. The teams get valuable points which protect them from relegation or help in advance. If such "love" is genuine, the team that needs the points badly usually gets them.

We hope that these examples from different sports disciplines will teach you a little that sometimes even the vast knowledge of the sport is not enough to achieve success at the bookmaking.