What is the correlation between the number of shots and the final result of the match?

Have you ever wondered what is the correlation between the number of shots and final result of the match? Do teams that have twice as many shots as their opponents, always win their games? From which areas footballers shoot the most goals? It is obvious, that football shots differ in their goal probability. A player shooting with a leg from 10 yards have much better chances for scoring a goal than even the best striker shooting a header from 20 yards. Despite that both attempts will be counted by the statisticians as a shot on target their importance on the final result of the match are completely different. That is why, in this article we will analyse from which areas of the field football players score the most goals. 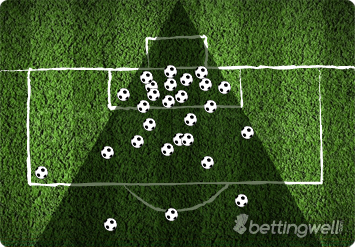 Bill Shankly once said, that a football team is like a piano - ‘you need eight men to carry it and three who can play the damn thing’. Whereas Johan Cruyff stated that for him ‘playing football is very simple, but playing simple football is the hardest thing there is’. Similarly, Diego Simeone thinks that the effective style of playing is overrated and he ‘prefers playing well to playing pretty’. For the Argentinean, it is more beautiful to score a goal after making only three passes than thirty-five.

Why do we mention this? Because every generation, country or team have their own style and approach to football. The Spaniards, the Portuguese and South American teams are basing their style of playing on perfect technical skills that enable their attackers the best possible position in the penalty box. Up until recently, the saying ‘kick and run’ was very popular in Britain. The ball was constantly flying over the heads of British players after crosses from flanks into the penalty box. The Italians and Germans are both known for their strong defense and quick switch into attacking, the Dutch for their total football with constant position changes, Barcelona for its never-ending passes and Atlético Madrid known for hiding behind their double-guard defence and waiting for set pieces.

All those playing styles and strategies, despite differences, have the same purpose - to get as close to the opponent's goal as you can and be able to make a successful shot.

It is more about the quality, not quantity of the shots

Teams from English Premier League score an average of 1.4 goals per game. To do that, they make an average 15 shots per match (on target, off target and blocked). Of course, it is the average for the entire league, better teams make more shots and score more goals. But does the high number of shots always convert to large number of goals? Not necessarily.

There are teams, that attempt a shot only when they are close to their opponent’s goal and the chance for scoring a goal is really good. From the other hand, there are teams that besiege their opponent’s goal and attack in every possible way. The opponent’s tactics have big influence on the number and quality of the shots. The tactics of some teams forces their opponents to attempt many long-range shots, knowing they have little possibility of scoring a goal with that method. In other cases, team’s defence forces the opposition to move through the flanks and cross the ball which they can easily block with a header. Therefore, do statistics of the made shots do not directly correspond to the scored goals, and consequently, points?

For the sake of this article, we will split shots into two categories. One is connected with part of the body that hits the ball (leg / head - we do not consider extreme, rare situations where goal is scored with chest or belly) and the other is concerned with the distance from which the shot was made (vertical - the distance from the goal and horizontal - the angle of the point from which the shot is made towards the centre of the goal). It is obvious that the closer to the goal and centre part of the penalty box the easier it is for the player to score a goal.

A shot can be considered a successful one, even if it do not results in a goal. Frequent (and accurate) long-range shots might prompt a change in opponent’s tactics, higher pressing from midfielders and consequently a chaos in their defence. We have forward that is very good in aerial battles? Great. The opponent will have to strengthen their flanks to prevent crosses towards the penalty box and will loosen-up their central defence. A clever team can use it to their own advantage.

The 2013 / 2014 Champions League campaign will serve us as an example illustrating the influence of the style of playing on the shot effectiveness. FC Porto played in one group with Atlético Madrid, Zenit Saint Petersburg and Austria Vienna. The Portuguese team got only 5 points in all their group matches and left the tournament much quicker than they have expected. The point is - in their all six games, Porto players have scored only 4 goals. To do that, they needed 108 shots, which gives them a mediocre average of 3,70% successfully made shots. What is interesting, they did not score a single goal from outside the box, despite 51 attempts. The only team with even worse statistics was Juventus, who did not score a goal from outside the penalty box despite 55 attempted shots. Barcelona stats were not so different from those of the previously mentioned teams - from 59 shots from outside the box they only scored once (1.69%). From the other hand, Real Madrid team, who later on have won the trophy, have scored 5 goals with that method. To do that, they needed 77 shot attempts (6.49%).

A team with the highest number of shots was Bayern Munich - 239 shots gave them 24 goals (10.04%) and the semi-final of the competition. Winning team of Los Blancos, have made overall 203 shots which they converted into 38 goals (18.72%). The best team when it comes to these statistics was Paris Saint-Germain which players have scored 24 goals from 118 shots - which gave them a very good conversion average of 20.34%.

There is another interesting statistics when it comes to PSG. They have made 7 shots in the penalty box, all of which ended up as goals. This was primarily because they perfectly used the physical abilities and cleverness of Zlatan Ibrahimovic in the penalty box. A complete opposite to them were players from Bayern - 1 goal in 9 shots (11.11%) and Juve - 1 goal in 12 shots (8.33%). You start wondering, how it is possible to not to score a goal from 11 / 12 shots made from a 5 metre line.

my favourite team ever was Greece in 2004. 20% of possesion, great defence and one corner of free kick was enough to them to score a winning goal. If I was a coach I want my team to play like this

I remember Barca's siege on Chelsea's goal and the deadly counter-attack by Torres to give them CL final. Man, this was a long time ago. Gettting old here