Skillfully made analysis before the match can be the key to a successful bet. Among the football fans and bettors, there is a popular opinion saying that the team with the higher ball possession is more likely to win. Is it true? Let us find out. 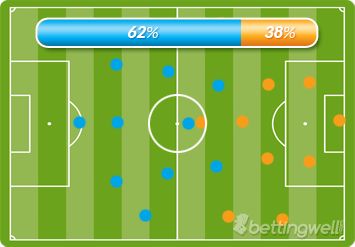 During Euro 2016, the Spanish national team had the highest ball possesion percentage

The players from the Iberian peninsula for years have been known for their love for playing the ball for the long time with many passes. The pioneer of such style is the team of FC Barcelona, with her famous tiki taka - a football style in which hundreds of endless short-passes across the field are made. With time, the Spanish national team also started using this system and modified it. At the beginning it proved to be very effective, helping Spain in winning two Euro’s and a World Cup, but with time it become stagnant and predictable.
During the already mentioned Euro 2016, Vicente del Bosque players were the ones with highest ball possession in the tournament. Despite all that, they were eliminated in the 1/8 match, losing to Italy (0:2) which preferred totally different style.

Spain’s ball possession, which was 59%, proved useless in this game. Known for their defensive approach Italians, secured their back and then scored goals after a set piece and a mistake by David de Gea and counter-attack at the end of the match. But to do that, Antonio Conte’s players had to run 8 km more than their Spanish rivals (118 km - 110km).

Even worse for La Furia Roja was the previous big tournament, the 2014 World Cup in Brazil, where they ended their participation at the group stage and got humiliated by the Netherlands. Despite having a ball possession of at least 60% in every game, they could not dominate their opponents and ended up going home before the serious competition even begun.    For an average football fan it was especially odd because Spaniards totally dominated football for years, excelling in last 3 major tournaments, being the only team ever to win all three of them (Euro, World Cup, Euro) in a row. Their performance at the 2010 World Cup in South Africa was praised but at the same time they were the least goal-scoring champion in history (barely 8 goals in 7 games). They had average 60% of ball possession in every game and in play-off round it was even higher. It was their plan to control the game but also to discourage the opponents who at the end had little ball possession, will or even strength to fight.

Because, as every person who at least once played this beautiful sport knows, nothing frustrates and exhausts as much as running after the ball. The Spanish national team perfected the ability to win matches with as little effort as it could be mainly because of their ball possession (at the same time tiring the opponent). Every game in the play-off phase was similar. After loosing the ball, del Bosque men pressured, took it back and once again started the tiki-taka, exhausting and dispiriting their opponent. They did that while winning 1-0 with Portugal, Paraguay, Germany and finally with Netherlands in the final.

From the point of view of the tournament it is a perfect score - you went through next rounds with a minimal effort. Finally everybody stopped saying that Spain plays attractive but ineffective football. Spanish style was glorified and posed as an example for other teams all around the world who often attempted to copy it, most times unsuccessfully. We will elaborate on this subject later on.

Interesting are the statistics of ball possession for the rest of the teams of the Euro 2016. One of the best results as for the ball possession was that of national team of Ukraine - at the same time considered as the worst team of the tournament. In this case the high ball possession did not result in victories or even a single point. What is more, the Ukrainians did not even score a goal in the whole tournament. The reason for such statistics of this team could be that when loosing in every game, the Ukrainians had to play the ball in hope to change the result while their opponents let them have the ball and counter-attacked them successfully at the same time resting for their potential next matches.

Same thing goes for England in the game with Iceland. Gigantic difference in ball possesion (63% - 37%) shots (18 - 8) and corner kicks (7 -2) proved useless for the English side. The brave Icelanders despite losing the goal in the first few minutes of the game, came back and not only drew the score, but also won the match, in what was later described as one of the most suprising results in Euro 2016. Only 37% of the entire ball possesion was enough for the Iceland team to send Rooney and his English side back home.

A complete suprise of the French tournament was the team of Portugal. Poor performances in the group stage with 3 draws, then lucky games with lower percenatage of ball possesion and a lot of good fortune was enough for Portugal to become the European Champion. All it took them to get those golden medals was 41% ball possesion with Croatia in 1/8 play-off round, 46% with Poland in quarter-final, same 46% with Wales in semi-final and ultimately 47% in the grand finale with host team of France.

You can wonder why such technical geniuses as Ronaldo, Nani, Quaresma or Renato Sanches let Poland or Wales to play the ball, after all, those teams have a solid defence and quick counter-attacks in their DNA, they struggle playing the ball. Was it maybe a strategy of Portugal coach not an accident? It seems that Portuguese manager thought (just like del Bosque in 2010 and 2012) that to win a tournament it is more important to play effectively and efficiently not attractively, focusing on tactics and winning every game with the least effort possible.

Famous for many controversies he sparks, the Portuguese manager states that ball possession is only numbers for the statisticians and it has no impact on the outcome of the match because what counts is what is in the net. He went even further by saying that high percentage of ball possession only means troubles. It is best to defend your goal tightly and wait for the opportunity to strike with a fast and deadly counter-attack.

These are not only empty words spoken by a jealous man. He was the one that implemented this defensive but effective style in his teams, for example in a match between his Chelsea and Liverpool on Anfield at the end of the 2013/2014 Premier League season.

Mourinho’s strategy was to give the initiative to The Reds and wait for their mistake, even the tiniest slip. Even before the match, The Special One could not predict that, as it turned out, the Liverpool slipped...literally. At the end of the first half, when there was still a goalless draw 0:0 and Liverpool absolutely dominated, The Reds captain, Steven Gerrard accidentally slipped and left Demba Ba with open path to the Liverpool goal, Chelsea striker put the ball into the net without any problem. In the second half, despite constant pressure from the home team and their impressive 73% of ball possession it was Chelsea players that counter-attacked and destroyed the dreams of the Liverpool side for first Premier League title since 1990. 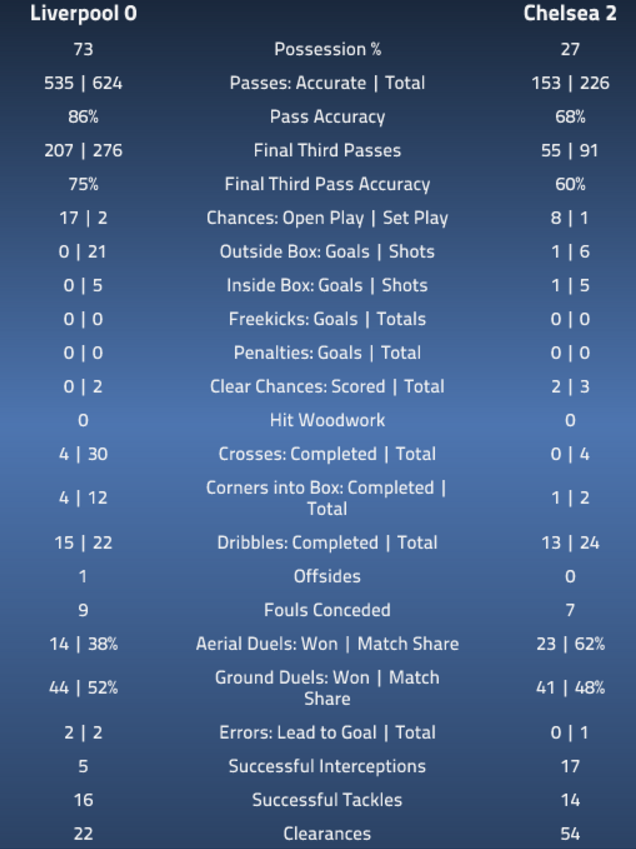 Atletico Madrid, despite having a very low ball possesion was inches from winning the UEFA Champions League

Almost through the entire 2013 / 2014 UEFA Champions League campaign the Atletico Madrid strategy was very simple - giving the ball to the opponent and focusing on their perfect defensive. This approach paired with players destined for that type of football helped Los Colchoneros to transform from an aspiring, solid team into one of the European top sides that scares even the biggest giants of football. In the whole tournament Diego Simeone players had an average 40% of ball possession and 60% of their goals were set pieces or counter-attacks. This strategy paid off up until the 93 minute of the final in Estadio da Luz in Lisbon when Sergio Ramos header saved Los Blancos and evened the match. Tired Atletico Madrid players were then destroyed in the extra time by their bitter rivals from Real Madrid.    Another example is a game between Celtic Glasgow and Barcelona in the 2012 / 2013 Champions League edition. The group match between these two sides was at the same time the 125 year anniversary of the Scottish club and the home team could not ask for a better birthday present than a match with Blaugrana at its prime at their home ground of Celtic Park. With the fantastic support from the packed stadium, the home team beat one of the greatest football teams in history, even though their ball possession was only 11%, with 89% of the entire ball possession for Barcelona. Despite making 955 passes (Celtic made only 166) Lionel Messi and his Spanish side lost. 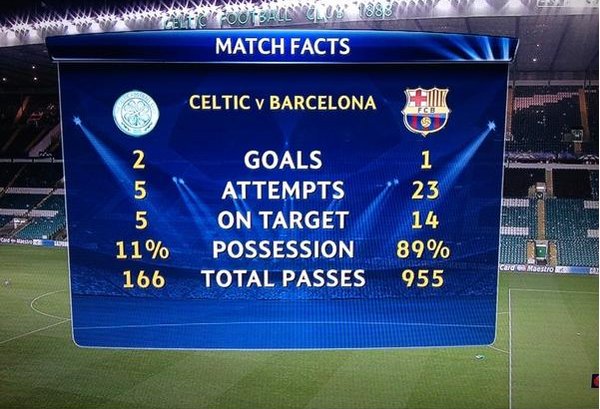 Despite few fails, both national team of Spain and Barcelona are considered as an example for other teams of how to successfully control the ball for a long time. Many teams attempt to use this style, some quite successfully but most fail miserably. Why? Because to play like that, the players need to both have extraordinary technical abilities and tactical awareness. It is essential for players to move on the field, create one-two passes and stick to the tactics, but also to improvise, a thing that not everyone can learn.

During the 2011 / 2012 Premier League season that style was adopted by the Swansea team. Despite being third in the average ball possession rank, the team ended up at 11th place in the table. Swansea managed to create 472 goal-scoring opportunities playing like that while other teams with lesser average ball possession had at least 700, so about 40% more than the Welsh club.

Swansea players controlled the ball and passed it back or across their own half, that is why they failed. Barcelona is successful because they play the ball on the opponent’s half and while its players seem to pass in a lazy manner, in reality they constantly are looking for an opening, for a opportunity to create a goal-scoring chance for a teammate.

There are countless examples of such experiments everywhere. In 2010 one of the best teams in Polish Ektraklasa back then, Lech Poznan, appointed former Barcelona legend, Jose Maria Bakero as their manager. The spaniard wanted to implement tiki taka philosophy into polish club’s strategy but his players who were used to playing with counter-attacks did not understood his vision. After a year and a half, the team from Poznan have won only half of all their matches and the Spanish coach was dismissed by the club’s board.

With significant ball possesion you win titles not single games

This statement was once said by one of the top football managers and you must admit, that there is a truth in it. As it was already mentioned, both Spanish national team and Barcelona seem to still be successful, despite occasional losses (like the one with Celtic) and have been in the football elite for many, many years, winning numerous trophies. And although football is unpredictable, looking at a bigger picture one could notice that the teams with higher ball possession have better chances to win, of course that does not mean they will always win...