Does the better team always win in the penalty shoot-out?

There are two theories concerned with the penalty shoot-outs. The supporters of one, consider them to be the essence of football, a real fever pitch for the fans of teams that will decide the result of the match with this method. Others, believe that this method of determining the winner of the match is one of the most unjust inventions in the history of the world. Obviously, among the supporters of the first theory are not the fans of those teams that have lost their games after penalties but those of the winners. Both theories have their advantages and disadvantages. But have you ever wondered what are the chances of particular teams for the win in the penalty shoot-out? Will the favourite of the match beat the underdog also in the penalties? The statistics show a very interesting occurrence. 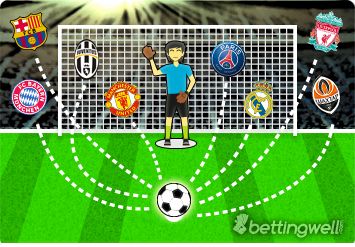 How often penalty shoot-outs determine the winner of the match?

Let us take the example of the European Championship - in the XXI century there was 5 Euro tournaments (as for 14.11.2016). In the play-offs, including quarter-finals, semi-finals and finals, there was overall 43 played matches. 16 of them (roughly about 40%) ended with a draw in regular time and in consequence there was extra time. 10 were still even after the extra playing time and required penalties to determine the winner. Thus, statistically, almost every fourth match in the play-off round ended with the penalty shoot-out. Hence, maybe it is worth spending one or two training sessions to practice this element of the game?

Football statisticians claim that a penalty given during regular time is almost 80% chance for scoring a goal (what is interesting, they state that even if the goalkeeper picks the right direction of the shot, he has only 30% of saving it - of course it is only statistics). In the penalty shoot-out, incredible pressure that is put on the players, along with the fatigue, increase the chances for the goalkeepers to save a penalty. For instance, in the quarter-final of the last European Championship in France, two old-rivals faced each other - The national team of Italy and the national team of Germany. After the regular and extra time there was still a draw so there had to be penalty shoot-out to determine the semi-finalist of the tournament. There was overall 18 penalties taken and both teams did not convert 7 of them (38%). When you look at the names of the players that missed those penalties, their quality and market value, it seems unimaginable.

Other unbelievable penalty shoot-outs of the European Championships? Everybody remember fantastic Francesco Toldo who guided Italy right to the final of the tournament in the 2000. The host team, the national team of Netherlands, were sure they will win the competition. The Oranje were like a storm in the previous phases of the tournament (defeating 6:1 packed with football starts national team of Yugoslavia, among others). The Italians were supposed to be another stop to the desired final. The bookmakers shared this opinion and gave the hosts much higher chances for the advancement to the final.

The events from the 29.06.2000 will haunt the supporters of the Oranje for the very long time. Dutch players have missed 2 penalties in the regular time and added 3 missed penalties in the penalty shoot-out. Their dreams of winning the competition held at their own country were crushed. Someone will say: ‘How is it possible that such quality players have missed overall 5 penalties in the most important match of their lives?’ There is no such thing as ‘impossible’ in football, the quicker you learn it, the better chances you have for being successful in betting on this sport.

Do favourites always win in the penalties?

As the statistics show, between 2000 and 2016, in the most prestigious competitions of both UEFA and FIFA, there was 53 penalty shoot-outs. 30 of them have been won by the favourites and 23 by the underdogs. Thus, according to these statistics, the favourites win the penalties in only (or even in) 57% of the cases. Although remember that the word ‘favourite’ is quite theoretical in his case.

So when the penalty shoot-outs occur? Mostly in the knock-out phases of the big tournaments and European or domestic cups. Thus, it is hard to expect that in the round of 16, Brazil will face, let’s say, Gibraltar (with all due respect to the national team of Gibraltar). And even if this would happen, it is doubtful that the Canarinhos would require an extra time and penalties to win such game.

Generally, at this level of competition, teams that face each other have similar quality. For example, in another match of the Euro 2016 in France, Poland played Portugal. In the regular time of this quarter-final game there was a 1:1 draw and a goalless extra time. Thus, the winner of the match had to be determined via penalty shoot-out. At the end of the day, Portuguese players were a bit better at converting their penalties and they were the ones that advanced to the semi-final (they won the tournament later on). But if it was the other way around, and the Poles would be the ones to progress to the semi-final, would it be such a surprise?

Is it better to start or finish the penalty shoot-out?

It is said that penalties are like a lottery, that pure luck is more important than, in this case, football skills. According to this theory, any team from fifth football division with a fat klutz as a goalkeeper and limping striker have 50% chances of beating in penalty shoot-out the likes of Bayern Munich with Manuel Neuer between the posts. In reality, it is not like that. Of course luck is very important, as it is in every aspect of life, but football skills and mentality of the players are also crucial.

Even the smallest, most insignificant details are also important. On which goal will the players shoot? Fans of which team will sit behind that goal? Which team is in a better mental state at the moment of the penalties?

Surely, everybody remembers the 2005 Champions League Final and Liverpool’s historic triumph in the penalty shoot-out. Would it be possible if the course of the match was different? After the first 45 minutes, the only thing that Milan players were thinking about was the destination they will chose for their holidays. The Italians were crushing Liverpool and only a madman could have predicted that The Reds will level the scores. But it happened. With the roaring support from their fans, Liverpool scored three goals and after the extra time, there was a 3:3 draw. Every non-Milan fan supported the English side in the penalties. Italians were both afraid and shocked because of what have happened. After their fantastic comeback, Steven Gerrard and his Liverpool team gained a massive psychological advantage before the penalties, which they had to use to win the trophy.

An interesting observation was made by the English scientists. Based on their studies, they determined that a team that begins the penalty shoot-out have 60% chances of winning it in the end. Why is that? There is theoretically less pressure put on the first players that shoot the penalties. If they will not convert their penalty, in the worst case there will still be a draw. From the other hand, the player ending the penalties, in the best case can level the scores (given that no one before him missed a penalty).

To confirm this, the scientists have made a study among the players from lower English leagues - on the question whether they would want to start or end the penalty shoot-out, 100 / 100 answered they would want to take the first penalty.

Best example? In the final of the 1986 European Cup edition (the predecessor of the UEFA Champions League) FC Barcelona played on the Ramón Sánchez Pizjuán Stadium, Steaua Bucuresti. The Catalan club was an obvious favourite but after the 120 minutes there was a goalless draw and the winner had to be determined via penalties. The Romanian side was picked to begin the shoot-out. Dismayed Barcelona stars were unable to convert a single penalty and beat Helmuth Duckadam. Romanian goalkeeper saved a record number of 4 shots and his team was victorious.

The longer the penalties take, the higher is the chance for the win of the favourite

It is a rule that applies not only to the penalty shoot-outs and not only to sports in general. To put it simple, statistically the higher is the number of taken penalties, the bigger is the chance for the front-runner to confirm their superiority, as the weaker team may finally run out of luck. It can be also observed, for example, in tennis. There are more surprising results in the tournaments where you play games to two win sets than in those with three. The longer the game takes - the smaller is the unpredictability.

Following this thought, the win of SK Bat’ov over FC Fryšták should be acknowledged as the most deserved one. These two clubs from the Czech fifth division met in the 2016 in the regional championship match. After both regular and extra time, the score was 3:3 and the winner was to be decided through the penalty shoot-out. There was overall 52 penalties and the home team have won 22:21! After the last, decisive penalty, one of the fans have shouted: ‘finally!’, and the player that shoot the last penalty have joked that his teammates asked him to miss it because everyone wanted to go home already. What is more, the president of one of the teams have stated that he missed a family BBQ party because of the never-ending penalty shoot-out.

liverpool milan was the best match ever, I remember it like it was yesterday and that crazy dance of insane Pole in the Goal