Triathlon is a sporting discipline which contains of swimming (1,5 km), cycling (40 km) and running 10 km. It dates back to the 50's of the XX century and was founded thanks to the love of the Americans to jogging. With time, however, it was claimed that running itself was not enough and it was decided to vary it with swimming and cycling. Much time has passed and the discipline it still developing. It should be mentioned that in the first competitions of the Iron Man series in 1978 just 15 sportsmen took part in the competitions. The competition was examined by time and last year 1500 sportsmen from 50 countries took part in it on Hawaii. 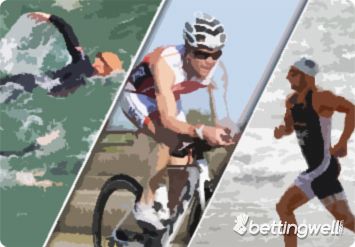 Types of bets on triathlon

The most important tournaments in the triathlon’s calendar are the Iron Man competition series, known as the World Championship, World Cup and, of course, the Olympic Games, where triathlon debuted in 2000 in Sydney. Namely during this tournament bookmakers usually set odds for several markets.