It is estimated that more than two billions of people use bikes. For ones it is a means of transportation, and for others a form of rest and a way to spend leisure. There are also people who believe it is the most beautiful kind of sport. 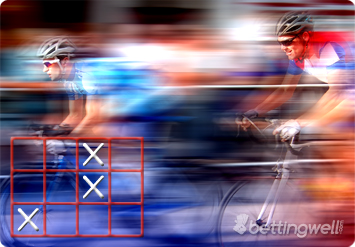 The first professional race on a bicycle was held in 1868 in Paris, and since 1896 this discipline has been in the Olympic games program. The biggest professional races are Tour de France, Vuelta a España, Giro d’Italia, which attract a huge amount of sponsors and are tracked by millions of fans all over the world. Thus, appearance of bets at bookmakers on this kind of sport was a question of time. At the moment punters have not only bets on the largest Tours, but also for less prestigious races, what lets predict the events virtually during the whole season.

Types of bets on cycling

The most popular bets on cycling are those for the winner. This type of bets is the most widespread among amateur punters, who have some knowledge, but is far from being an expert. At several bookmakers you can bet on a triumphant’s nationality.

More experienced punters and those who dispose of a wide range of information about cyclists and the high-way, more often decide to predict winners of certain stages. Rather popular kind of bet is bet on a cyclist, who was not listed among the favourites before the race, but who has some qualities which according to our mind can help him at the given stage. If our predictions are true we can withdraw money from the bet before the race end and be pleased with the winning.

The following kind of bet popular among professional punters are bets of the H2H type on certain cyclists. It has sense especially with sportsmen, taking lower places in the rating, punters' knowledge sometimes is greater than the bookmakers’, what lets them find profitable odds. And it does not matter, whether the racer ends the race at the 72nd position, more important is for him to be before the opponents in pair. H2H bet is also popular among fans of express-bets. Contrasting of two or three pairs on a coupon, of course, increases the risk, but it also substantially increases the potential winning.

The most well-known cycling race in the world. It takes place in June and consists of 21 stages in diverse regions, what makes the high-way cyclists’ task harder. Here you can see lowlands, small hills and, killing for some cyclists, mountain stages. In cycling every stage is virtually a separate race, so here we have a huge space for maneuvers. Knowing the possibilities of particular cyclists you can bet H2H or on favourites of the following stages, depending on their difficulty.

The race around Italy is one of the three largest cycling races in the world. As in case of the two other races its route first goes across lowlands and then the competitors get to mountainous masses of the Alps and the Dolomites, where during an ascend the race’s fate is very often being determined. Due to the race being held in May-June, the whimsical weather often presents cyclists surprises. You should take into account that during several stages the track’s surface can be wet and the temperature can be several degrees lower than usual, and you should prefer those cyclists who will not have such conditions problematic.

A race around Spain is the last of the largest events during the whole year, which takes place yearly in September. Similar to Tour de France, it consists of 21 stages, divided by a two-day break. The same as the two other cycling races it attracts a huge number of punters from all over the world. Of course, in the majority of cases the race’s fate is decided during the mountain stages, when steep slopes of the Pyrenees become the main examination on the way to the triumph.