Shot put is a discipline as old as the world. First mentions about a similar kind of sport can be found at Homer, who described competitions in pushing rocks for different distances, which were held by soldiers precipitating the Troy. Later in XVII century the English soldiers held competitions in pushing cannonballs in order to kill time. After all, it was decided to unify the rules and thus this discipline was born, which creates the history of sport since the first Olympic Games in 1896. Despite shot put is not the main position at bookmaker offers, it still has many fans and punters. Creating this guide we have specially talked to a previous sportsman, now a punter, who specialises namely at shot put. 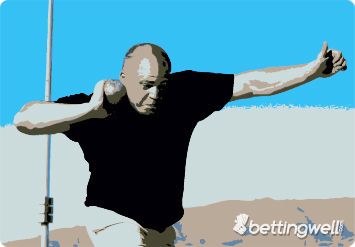 Competitions and types of bets on shot put

The most important event, of course, is the Olympic games, a bit lower in the hierarchy is the World and European Championship, then many athletic tournaments which have more of a commercial character, but competition of a lower prestige is compensated by a higher prize fund. You should not deceive yourself if you want to bet on competitions in shot put within the whole year, you will have problems. During large tournaments the majority of bookmakers set the odds, usually for several markets.