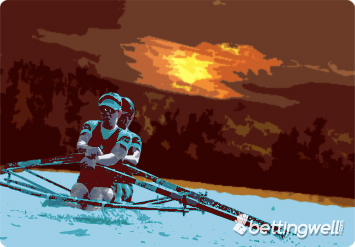 History of the rowing sport began a long time ago. Back in ancient Egypt pharaohs held races on barges that attracted huge number of spectators to the shores of the Nile. Several hundred years later rowing was improved by the Vikings, but in their case the sporting competition had secondary importance, the main aim for them was to conquer European countries.

The first official competition in rowing took place in 1715 among professional boatmen on the London Thames and the prize was a red overcoat. These competitions take place till today and are very authoritative.    Typically, rowing arose in 1829 thanks to students of two prestigious universities – Oxford and Cambridge. Yearly competition between universities are held today as well, and the race course is monitored by a quarter of a million of Londoners.

The most important event in the rowing world is, of course, the Summer Olympic games, in which the discipline has been present since 1900 (was present 4 years earlier in Athens, but was not held due to weather).

Types of bets on rowing

In bookmaker offers you can, of course, find bets on the most important competitions in rowing, but it would be a lie to tell that the number of bets is satisfactory. Bookmakers limit themselves to the most prestigious races, the Olympic games, the World and European Championships.

Usually bookmakers can offer their clients several types of bets:

Principles of successful betting on rowing